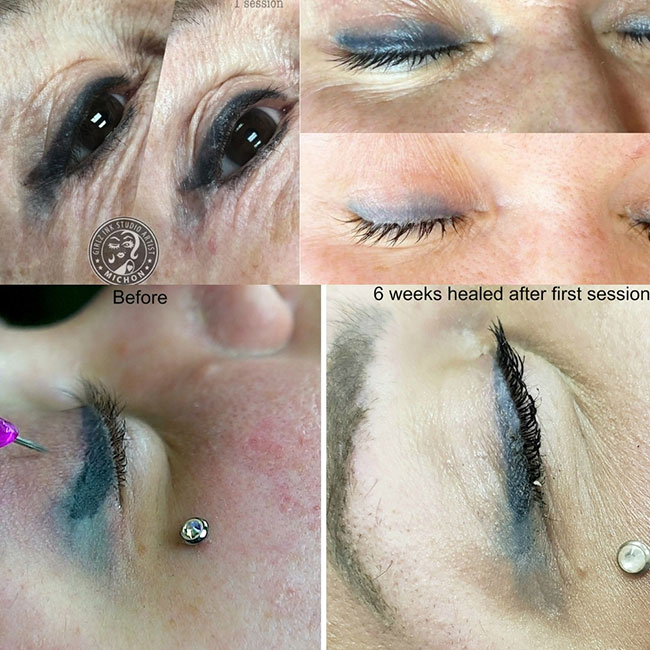 How many times have you turned away a client who had a migrated eyeliner? Maybe you just didn’t know that it could be fixed? Maybe you thought that something like migration wouldn’t be possible to remove. But luckily, Li-FT® can and WILL fix migration and it does so beautifully.

First, let talk about what migration really is. In the Permanent Makeup Industry, we think of migration as just eyeliners gone bad. But be aware that migration can be found in body tattoos as well. Migration happens for a couple of reasons.

When an eyeliner or body tattoo has migrated, it means that the carbon did not stay in the place that it was implanted. It actually spread out underneath the skin and this causes a cloudy, blurry or bruise looking effect. For a very long time, years even, Teryn would not even touch a migrated eyeliner. It was believed that removing or lightening a migration would just cause the pigment to spread further. And although this can happen, if you use the proper technique, you can Li-FT® migration safely and effectively.

Never use a spreading technique such as circular movements or whip shading when performing Li-FT® on migration. Instead, you should use the Pointillism technique which is a non-spreading movement. Also keep in mind that it is very important to already be skilled and experienced in tattooing permanent makeup eyeliners before attempting to remove eyeliner and migration.

KEEP UP TO DATE WITH US